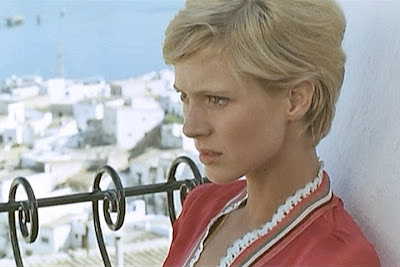 In THE GREAT GATSBY, Fitzgerald refers to an actress at one of Gatsby's parties as a "translucent orchid." Watching Mimsy Farmer recently in THE MASTER AND MARGARET, the phrase kept echoing in my head. I don't know if I entirely recommend that particular film - it's a little heavy on the Communist Party infighting - but it shows another, highly stylized side of Mimsy's acting and I enjoyed it. In fact, if Mimsy Farmer is in it, I'm pretty much going to like it.

I think there's an important distinction between actor and star. There are lots of actors who are technically proficient, who can summon up whole landscapes of emotions and convey them, but we will never enjoy spending time with their giant projected images in the way that we enjoy spending time with the lucky few who have that luminosity and transparency of artifice that stars do.

Hollywood has often been good at identifying that star quality and bringing it to audiences, but occasionally one gets away. Mimsy Farmer got away, probably largely due to the fact that her ascendence corresponded with the death throes of Hollywood and the star system. But I think there's more to it than that. Her best qualities onscreen - the painful sensitivity, the curiosity and the sudden flashes of moral abandon - weren't traits that Hollywood could present to best advantage. Not that they didn't burn through anyway, even as she played an assortment of rape victims (Hollywood couldn't figure out anything else to do with her). Fortunately Europe had all kinds of plans for her but we'll get around to that. 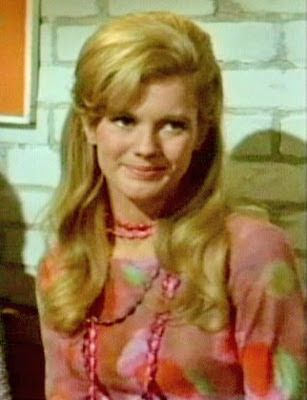 In RIOT ON SUNSET STRIP her virginal mid-'60s square character takes LSD and emerges as a butterfly of ecstatic body-consciousness (at least until... well, you'll see). I think it's an important moment on the screen. You sort of watch Mimsy outgrow the old dead Hollywood and the Mimsy who emerges is the Mimsy of her European period, the kind of turned-on American who can teach even Europe a thing or two about being free, open and elegantly stoned. But first she had to get raped again, as a teenaged beauty queen in the film DEVIL'S ANGELS. 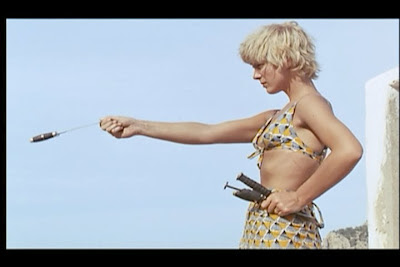 Then she was off to Europe, after costarring with Fabian in an AIP racing movie she jumped ship to appear in Barbet Schroeder's extremely appealing time-capsule MORE. Mimsy gets to play a much more complex character than she ever had before, an American heroin vampiress who uses up and discards a naive German. Though the film is painted in the colors of sun, sand and sea - it's a fully German story, straight out of Pabst and Sternberg. And Mimsy rips it the fuck up. She combines force, subtle shading and lots of sex appeal into one of the most overpowering star-making performances ever. Audiences loved it, critics were favorable (Roger Ebert's review is funny and cruel, but not to Mimsy), but most of all European filmmakers HAD TO HAVE HER. She personified her generation of exotic American females in the same way Louise Brooks had in her time. 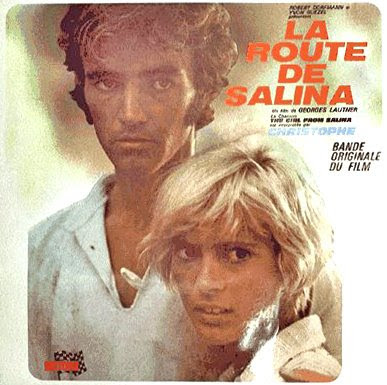 Georges Lautner cast her in THE ROAD TO SALINA, which for me is the ultimate Mimsy role. It's hard to find but the soundtrack has become popular. Here's a youtube clip with scenes from the movie edited into a music video for the theme song. It's a magical film. Mimsy's chemistry with the haunted Robert Walker Jr. (who looks like a mod Poe) is great and Rita Hayworth plays Mimsy's mom! I liked Mimsy before I saw THE ROAD TO SALINA, but seeing it sealed the deal for me. I hope to show it as a Weird Wednesday someday but the only print I've ever been able to locate is 16mm.

Next she appeared in Argento's great FOUR FLIES ON GREY VELVET and from there on stayed very busy, mostly in Italian genre cinema. Most of these films were never released in the US, or ever dubbed into English. In 1981 she worked for Lucio Fulci in his thriller THE BLACK CAT. Her costar David Warbeck did not have great memories of her. He remembered her berating him after a scene, saying "you call that acting?!" She was probably right.
Posted by Lars Nilsen at 12:10 PM

What a well-written and articulate overview of Mimsy Farmer's career. Interesting that she so often played rape victims in American productions. Most Americans tend to be crude and prudish, so I suppose the producers and studios at that time unfortunately thought they could most easily and palatably translate her individualized and powerful sexuality through that typecast.

Yup, and by that time Europeans had figured out that there are more than madonnas, whores and madonna/whores.

To you Mimsy fans, just letting you know I wrote an article on her that appears in the current issue of Shindig! magazine. Mimsy shares her thoughts on her life and career, and I offer an overview of her various roles and a take on her story. That mag does not post content on-line, but you can go to their site to see how to order a copy, if you're interested. It's issue #14.