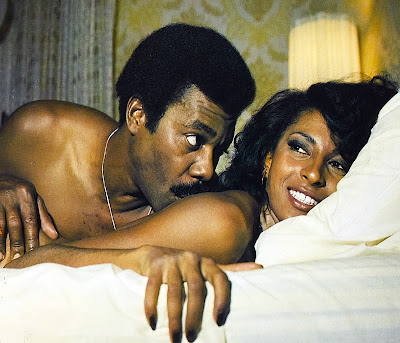 The greatest day of Thalmus Rasulala's life, courtesy of FRIDAY FOSTER.
OK, you can go ahead and plan your life around these. Sponsored by the great I Luv Video.

CHAINED HEAT With Star Sybil Danning Live!
JAN 7, MIDNIGHT, FREE, DIR. PAUL NICOLAS, 1983, 35MM, 95 MIN, R
Spend your Wednesday night locked in a squalid cage with a few dozen sweaty bad girls. Sound like fun? You bet it does! This is pure women-in-prison exploitation with all the catfights, steamy shower scenes and deviant sexuality you can handle. Maybe more! Linda Blair plays the new fish on the cellblock. With Queen of the Amazons Sybil Danning and CLEOPATRA JONES star Tamara Dobson as warring inmates. Kinky Stella Stevens cracks the whip as the captain of the guards and scuzzy John Vernon plays the warden (who has a hot tub in his office). Sharp-eyed viewers will also recognize the great Henry Silva. Others may disagree but I think this is a great first-date movie (but be sure to bring enough for her cab fare home just in case). Either she'll love it or she'll flee. What better way to separate the wheat from the chaff? After all, who wants to get stuck with a good girl? (Lars)

FLYING MASTERS OF KUNG FU
JAN 14, MIDNIGHT, FREE, DIR. ARTIS CHOW, 1979, 35MM, 88 MIN, R
In her first film QUEEN BOXER, diminutive fighter Judy Lee demonstrated great acrobatic ability and superhuman stamina as she devastated a teahouse full of dozens of bad guys like a teenage tornado. Between QUEEN BOXER and this film, made seven years later, Lee a) learned how to act and b) got hot. So while this is an extremely cheap Taiwanese martial arts film with very familiar locations and costumes, Lee lights up the screen as "the Heartless Lady" who will stop at nothing to find her father's killer, even though the real culprits have framed her for murder and dispatched an assortment of colorful super-killers to stop her. There's a one armed swordsman, a female dart specialist played by the great Angela Mao, and best of all a guy who throws gnarly exploding metal skulls with his mind! Lee rips them apart and looks great doing it, like a deadly Asian Pebbles Flintstone. (Lars)

THE DAY TIME ENDED
JAN 21, MIDNIGHT, FREE, DIR. BUD CARDOS, 1979, 35MM, 79 MIN, PG
A psychedelic sci-fi freakout you can bring the whole family to. This strange and awesome alien encounter film takes a pretty basic premise about an alien landing in the desert, adds some Sun Ra style transmolecularization and about $5,000 worth of intense basement special effects. The final product is as close to total happiness as you can get without actually opening up your skull and messing with the wires and shit. The plot concerns a family get-together on a western ranch spoiled by the appearance of a glowing green pyramid in the horse corral. Soon all manner of aliens and UFOs are showing up to alarm the family and to - I don't know how else to put it - fuck with them. These aliens can communicate with them telepathically, alter destiny and make everything really shiny and pretty. Best of all, there's no real explanation. It just happens. I'll be enjoying this one with a tall frosty mug of LSD. Won't you join me? (Lars)

SINTHIA THE DEVIL'S DOLL
JAN 28, MIDNIGHT, FREE, DIR. "SVEN CHRISTIAN", 1968, 35MM, 78 MIN, R
This unusual sex film, made pseudonymously by Ray Dennis Steckler, the man behind THE INCREDIBLY STRANGE CREATURES WHO STOPPED LIVING AND BECAME MIXED-UP ZOMBIES and RAT PFINK A BOO BOO, reflects a lot of the artsy eclecticism that drove the last golden age of American film. Under the influence of Freud and Bergman, Steckler enacts a ludicrous, heavy handed psychodrama about that old standby, an attractive young woman with a father fixation. This same material, undoubtedly appealing to older men, has been done a million times, with predictable results. But Steckler's "let's put on a show" energy shines through the thin fabric of the plot. For every talky exposition scene there's an amazing dream/trip/hallucination/fantasy sequence to make you forget the silliness of the material. Multiple exposures, slow motion, psychedelic make-up and costumes and the talented Steckler's camera work combine to make these bizarre scenes some of the best you'll ever see. With Austin's own Gary Kent as daddy in the flashbacks and the gorgeous pinup model Diane Webber. (Lars)

BLACK SIX
FEB 4, MIDNIGHT, FREE, DIR. MATT CIMBER, 1974, 35MM, 94 MIN, R
"See the 6 biggest, baddest and best waste 150 motorcycle dudes!" During the golden age of the drive-in there was one genre that could always be counted upon to turn a profit: Biker movies. "Scooter Trash" epics like THE WILD ANGELS, BORN LOSERS, SATAN'S SADISTS, and of course the major studio stepchild EASY RIDER paid for any number of mansions in Malibu and the Hollywood Hills. The films were inexpensive to produce and were highly appealing to the young, mobility-mad white audiences who frequented drive-ins. Meanwhile across town, movies like SUPERFLY, COFFY, BLACK CAESAR and the like were packing 'em in at the inner city theaters. It took an exploitation genius like Matt Cimber (WITCH WHO CAME FROM THE SEA, HUNDRA) to bring the two audiences together in this story of an all-black Vietnam Vet biker gang who take on a rival gang of racist rednecks. The Black Six are all played by NFL stars, and while none are polished actors they are loose and likable and when it's time to throw an unwise user of the N-word through a wall, they execute the playbook flawlessly. (Lars)

SOMETIMES AUNT MARTHA DOES DREADFUL THINGS
FEB 11, MIDNIGHT, FREE, DIR. THOMAS CASEY, 1971, 35MM, 95 MIN, R
Our explorations along the fringe of world cinema have led us to some strange places: Indonesia with its anti-colonial mythic avengers, the Philippines with its low-budget action and gaudy textiles, Nigeria with its camcorder excursions into ludicrous high drama; but closer to home there's a country with a film making culture as weird as any of those. That country is Florida. OK, maybe it's more of a state than a country per se, but trust us, they make some crazy ass movies. And with the possible exception of THE WIZARD OF GORE none is stranger than this one. Some guy named Abe Zwick stars as a brutal transvestite whose odd, codependent relationship with his (apparently heterosexual) roommate Stanley turns murderous whenever Stanley brings a girl home. There's a lot of blood and mayhem but the tone is oddly like a John Waters movie only with more palm trees. This one is really strange and really recommended. (Lars)

FRIDAY FOSTER
FEB 18, MIDNIGHT, FREE, DIR. ARTHUR MARKS, 1975, 35MM, 90 MIN, R
Everyone knows the rough, tough ass-kicking Pam Grier of Jack Hill's great films COFFY and FOXY BROWN. But this classic from Arthur Marks (BONNIE'S KIDS, J.D.'s REVENGE) doesn't get mentioned very often. It's time to change that. Because this is one if the most unusual, fun soul cinema titles ever. It takes place in an alternate universe where virtually everyone is African American and the only whites are stooges or bad guys. Pam plays a photographer's assistant who witnesses an assassination attempt on Blake Tarr, the richest black man in America. When her best friend is killed under mysterious circumstances possibly connected to the shooting, Grier teams up with her harried and patient detective boyfriend Yaphet Kotto to get the story - and find the killer. Much less brutal and sweaty than the Jack Hill cycle, FRIDAY FOSTER presents Grier as a high spirited, quick witted knockout in the mold of a '30s screwball movie heroine like Myrna Loy or Barbara Stanwyck. For once Pam Grier is dressed, made up and lit like a glamorous star and not surprisingly she makes every other actress in Hollywood look like an anemic little wallflower. With an all-star supporting cast of black performers including Eartha Kitt, Godfrey Cambridge, Scatman Crothers and scene stealing Ted Lange as a pimp who really wants Grier in his stable. Music by Luchi De Jesus, who obviously just got one of those Peter Frampton voice boxes, because he uses it in every single song. (Lars)

GIRLS ON F STREET
FEB 25, MIDNIGHT, FREE, DIR. SAUL RESNICK, 1966, 35MM, 69 MIN, R
Completely bizarre episodic expose about the numerous forms of sexual deviance that fester behind closed doors in a typical all-American skid row neighborhood. Shockingly frank and experimental in tone and execution. The visual vocabulary of the film includes carefully composed expressionistic scenes as well as the more typical "new wave by necessity" look of most '60s sex films: hand held camera, overlighting, the use of a narrator to hold the story together (and minimize expensive synchronized sound). As much as I love black and white '60s sex films, most of them are just slack, lazy excuses for nudity. This film is (literally) insane but every frame is fascinating. When the parade of perversion is over you'll need a shower. Or a flogging. Or both. (Lars)

There will also be a new feature at Weird Wednesdays and Terror Tuesdays where you can buy a reserved seat ahead of time for two dollars so you won't have to wait in line forever. If you choose not to buy the ticket that's cool too. Don't worry, we're not jumping the shark, it's just an optional service.
Posted by Lars Nilsen at 2:00 PM

Amazing lineup! I think my Pam Grier bias is showing.....

If only I could be there for Chained Heat. I've been dying to see it since you talked it up before Judy Darling. I guess I just never got around to convincing myself to buy a VHS copy. Maybe I'll have to watch Reform School Girls again to get my Sybil Danning Women-In-Prison fix.

Can't wait for the rest of this line-up.

Your blog keeps getting better and better! Your older articles are not as good as newer ones you have a lot more creativity and originality now keep it up!