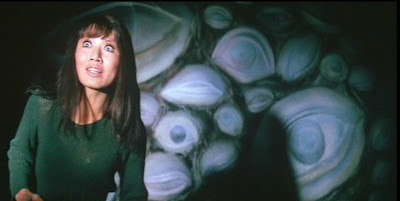 MOJU: THE BLIND BEAST
Since the folks over at the great I Luv Video are kind enough to give me my own pick shelves I popped over last night to change them out.

Here are my new selections:

VILLAGE OF THE GIANTS
This is the one about the giant teenagers who take over a town. It's really pretty subversive and funny. The music by Jack Nitzsche is great. There's a lot of that beehive and bikini sex appeal that I like from these sixties youth movies. Producer/director Bert I. Gordon (B.I.G.) specialized in movies with outsized protaganists.

THE YESTERDAY MACHINE
Made in Dallas Hitler Time Travel movie. Super cheap and great. Very imaginative in a cornpone kind of way. Like a lot of ultra low budget films it leaves a dreamlike aftertaste in your brain.

THE BLIND BEAST
From the same avant-garde Japanese theater world that brought you movies like FEMALE CONVICT SCORPION, this is a very strange dreamlike fantasy about a blind sculptor and the woman he loves. Some of the most bizarre sets ever built. Director Yasuzo Masumura also made the the equally odd BLACK TEST CAR and the Tashlinesque GIANTS AND MONSTERS.

CONFESSIONS OF A POLICE CAPTAIN
A pretty devastating look at police (and human) corruption in '70s Rome. Franco Nero and Martin Balsam take it all very seriously and the film has the nightmare realism of the best Italian polizieschi.

AT THE GUADALUPE STORE:

SHAOLIN INVINCIBLES
Judy Lee (FLYING MASTERS OF KUNG FU) stars in one of those kung fu movies that must make a lot of sense in the exotic east, but seem completely insane over here. She fights gorillas and weird wizards with long tongues that hang down to their knees. Run of the mill in some ways and capital K KRAZY in other ways.

THE ACID EATERS
The comparatively innocent adult film world of 1967 California responds to the LSD menace in the only way they know how: with boobs and tedious shirtless makeout scenes. Fortunately things get a little crazy in the Satan department and everybody has fun.

CASTLE OF FU MANCHU
I can't defend this Jess Franco Yellow Peril movie on any grounds at all. It's not especially good or original. But when you watch it you will feel immersed in a sort of tacky pulp nostalgia, you'll smell the vinegary newsprint as it powders away under your fingers. Franco's free-wheeling new wave style has a lot in common with the fast guys who made the old serials. And Christopher Lee is a great looking Fu Manchu. And Rosalba Neri is a great looking Rosalba Neri, as always.

SYMPATHY FOR THE DEVIL
This was originally called ONE PLUS ONE. It's Jean Luc Godard's Rolling Stones project. It documents the band in the studio trying out the song Sympathy For The Devil in different ways. It starts as a bluesy ballad, becomes a samba, then once Keith plugs in a little 15 watt amp and wails the paint off the walls, it becomes the song we all know and love. With interpolations of Fanonian anticolonialist discourse delivered point blank at the screen by murderous garbagemen and Anne Wiazemsky (Mrs. Godard) painting punny graffiti.
Posted by Lars Nilsen at 5:00 PM 2 comments: Links to this post 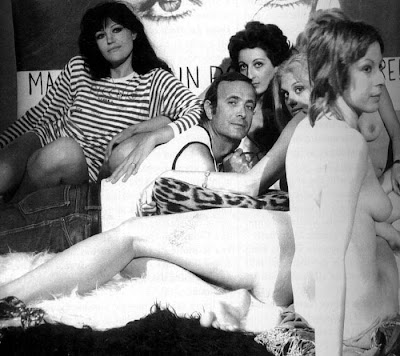 Here he is with friends on (I think) the MANHUNT set. DiLeo's sense of story (and humor) are missed more than ever. Watch his movies MR. SCARFACE, CALIBRE 9, MANHUNT and THE BOSS. Then and only then watch LOADED GUNS. Enjoy.
Posted by Lars Nilsen at 2:22 PM No comments: Links to this post

I wish there was more Bill Landis writing out there.

Here's a fantastic guide to the bygone food of Times Square by the late Landis and Michelle Clifford.

I have the late era Sleazoid Express and Metasex issues but if anybody has the original '80-'83 run of Sleazois I want it!
Posted by Lars Nilsen at 1:04 PM 6 comments: Links to this post